This Year 2020 is marked by great upheavals which have not prevented artistic souls from continuing to express themselves.
Stranded in Copenhagen when I had to travel to Paris to lead an Arabic calligraphy workshop, I had to adapt to be able to continue teaching.
I was inspired by my dancer friends who set up video conferencing solutions.
Calligraphy and dancing have a lot of similarities and differences. I had to find solutions. I wanted to maintain the quality of exchanges that face-to-face offers.
So the idea came to me to use two cameras. That of the Smartphone and that of the PC. The Smartphone camera staring at the paper sheet to observe the hands and the PC to display supporting documents and to follow up all the hand movements.
With this method, monitoring is done in real time and each student can benefit from the advice given to others. Anyone can ask a question, and everyone benefits from the answer.
After a life-size test, 3 courses are now offered online to learn and improve in Arabic calligraphy:
– Alphabet: each letter is carefully studied. The rules of proportions, inclination, and spacing are explained. 80% of the time is devoted to direct practice with individualized follow-up.
– Combination: to form words, you need to learn how to link the letters together. This course is therefore focused on connections and is 100% practical. It is also an opportunity to refresh yourself on difficult letters.
– Artistic: This more advanced course provides the tools to access artistic creation from Arabic calligraphy. An evolution between traditional writing performed on the metronome and creative fantasy. It opens your mind and helps meditation 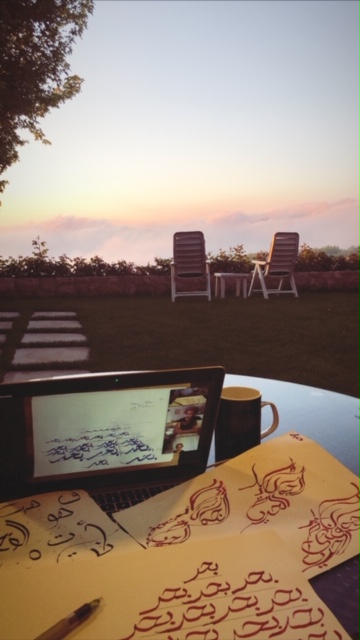 Student learning in Lebanon while I am teaching from Copenhagen 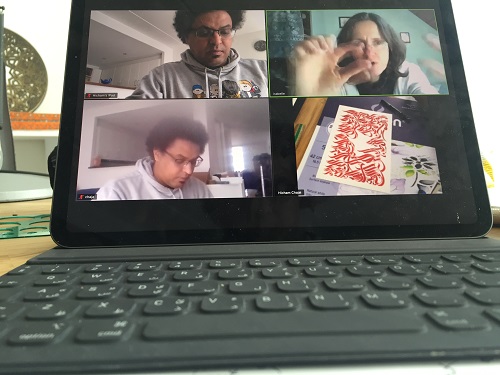 Using my iPad to teach 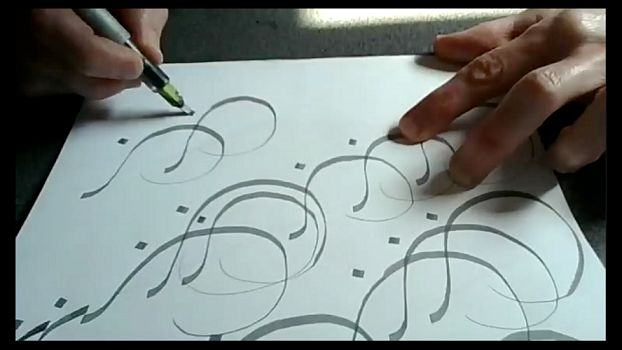 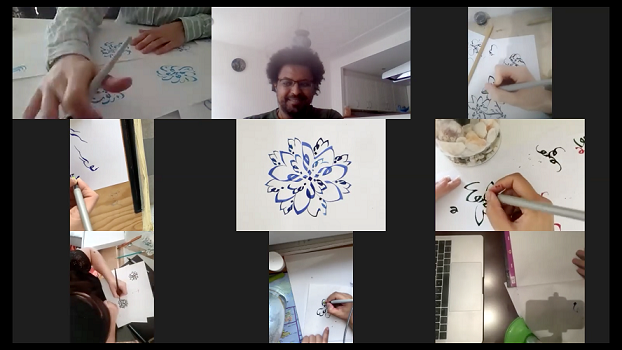 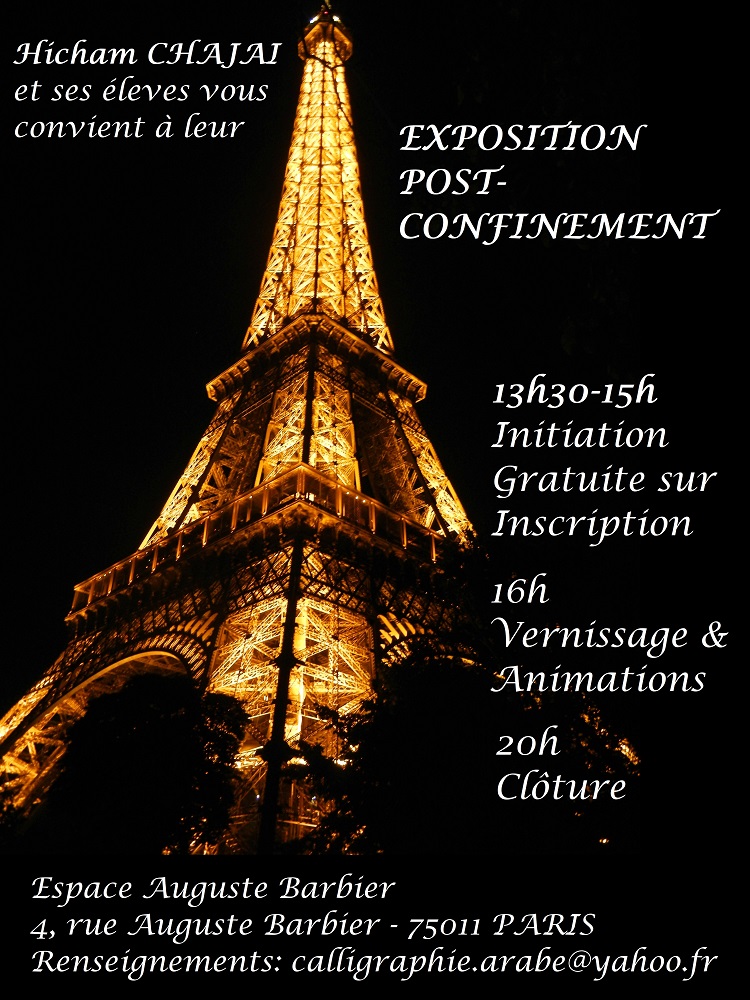 During the lockdown related to the COVID health crisis, I offered online classes to allow my students and new ones to continue learning Arabic calligraphy. My courses were focused on 2 subjects, technical mastery and the search for creativity.
During her hours of sharing my passion, the students developed the quality of their writing and explored new ideas for the artistic use of calligraphy.
Exhibiting my students in my new Parisian studio is a great honor for me.
Passing on your passion also means sharing the happiness and success of others.
7 students presented their creations each in their own style.
Samra came up with colorful calligraphy. She added her mastery of other artistic forms.
Madina chose some pretty texts which she represented figuratively. She also paid tribute to the Lebanese people as an expression of their sadness and solidarity in the severe trials they are going through at this time.
Isabelle is a painter and has integrated calligraphic elements into magnificent canvases which take up other oriental artistic expressions
Dhikra prepared a series of multicolored calligraphy with lovely proverbs
Nora proposed figurative calligraphy on colored backgrounds
Rassil who lives in Beirut sent a magnificent Lebanese flag covered with the names of victims of the Terrible Explosion of the Port of Beirut
Mehsen who also lives in Beirut has produced a fantastic series of celebrity portraits using carefully chosen texts.

A big thank you to all of you for your enthusiasm and the good time spent with you in Paris. I physically met some of my students the first time during this exhibition. 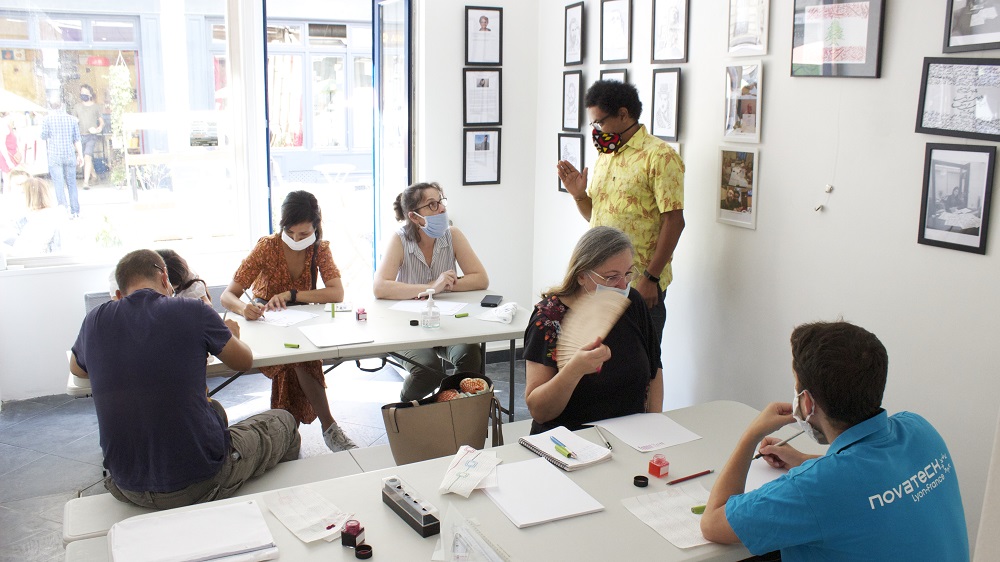 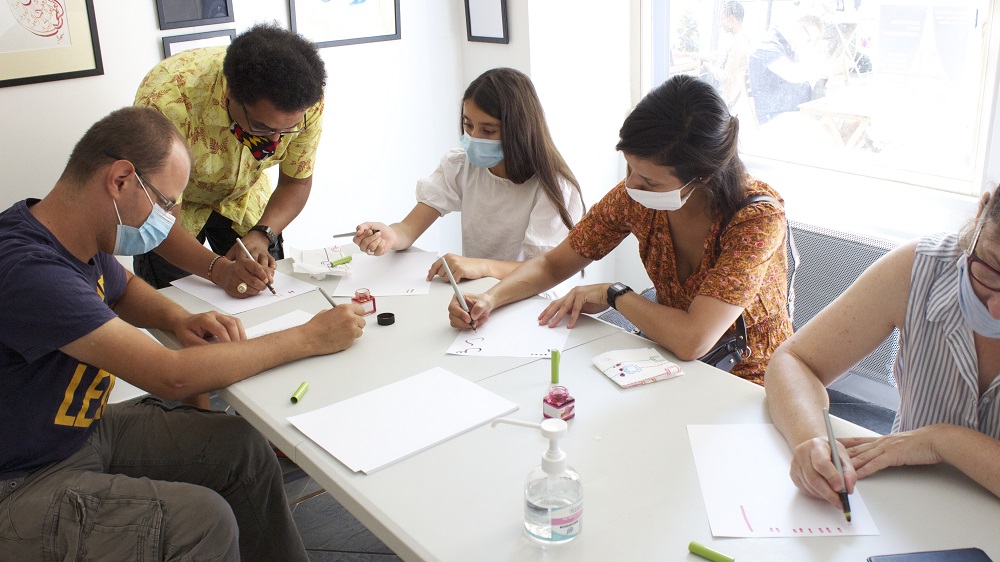 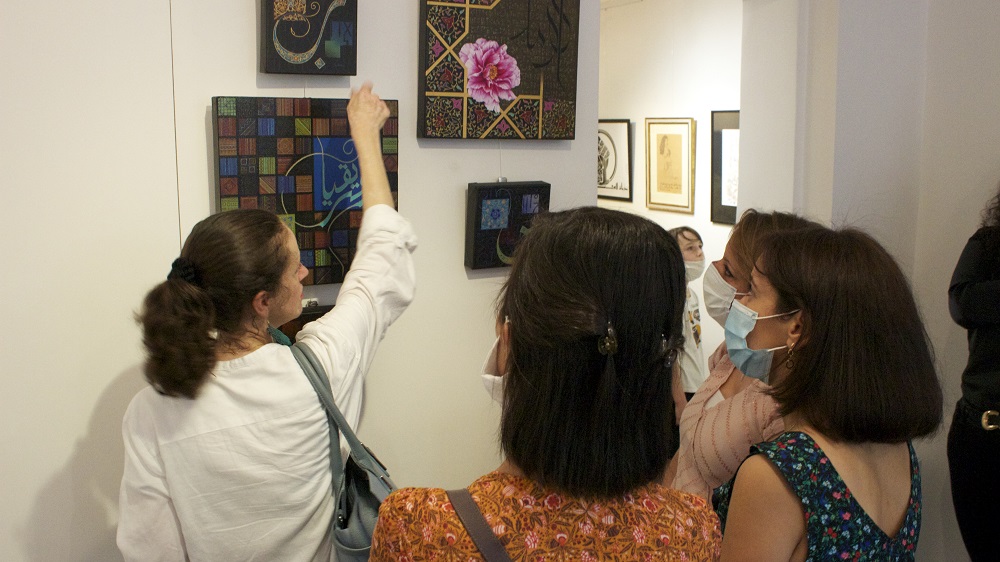 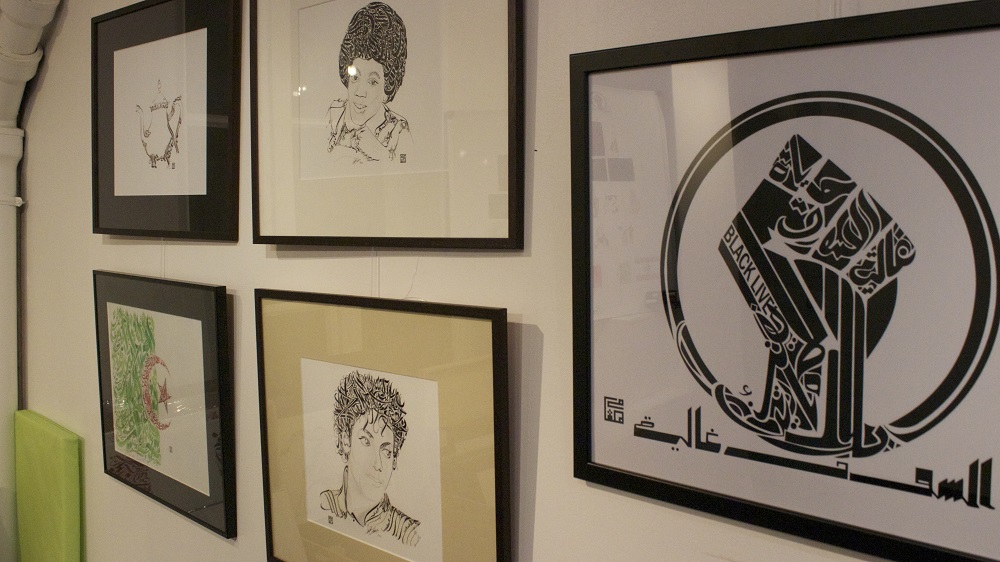 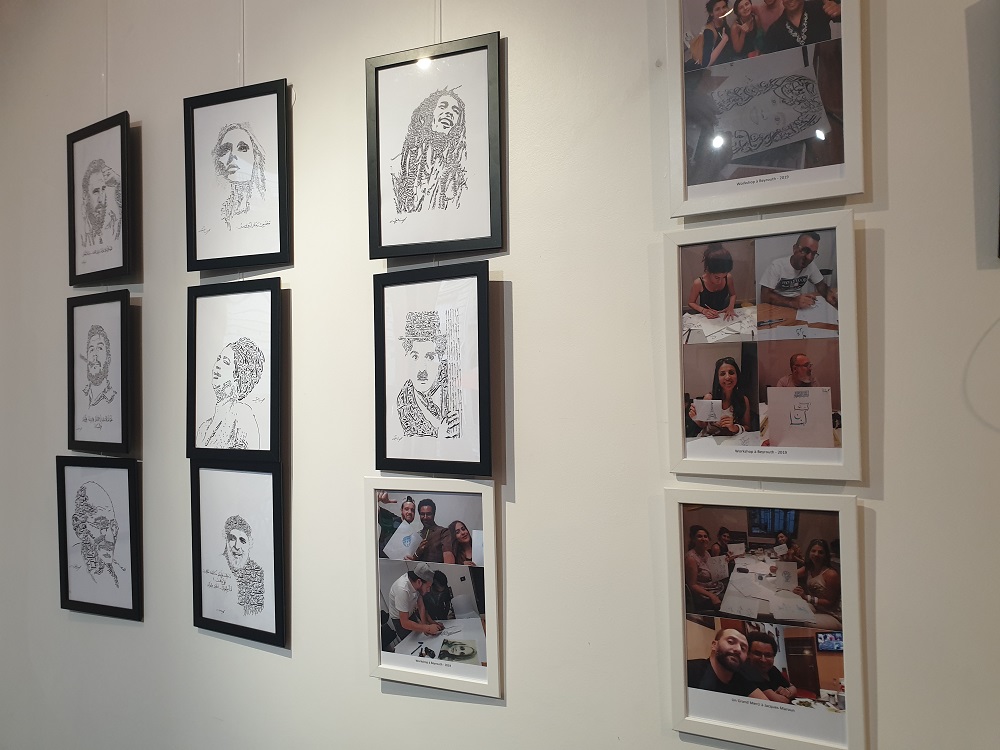 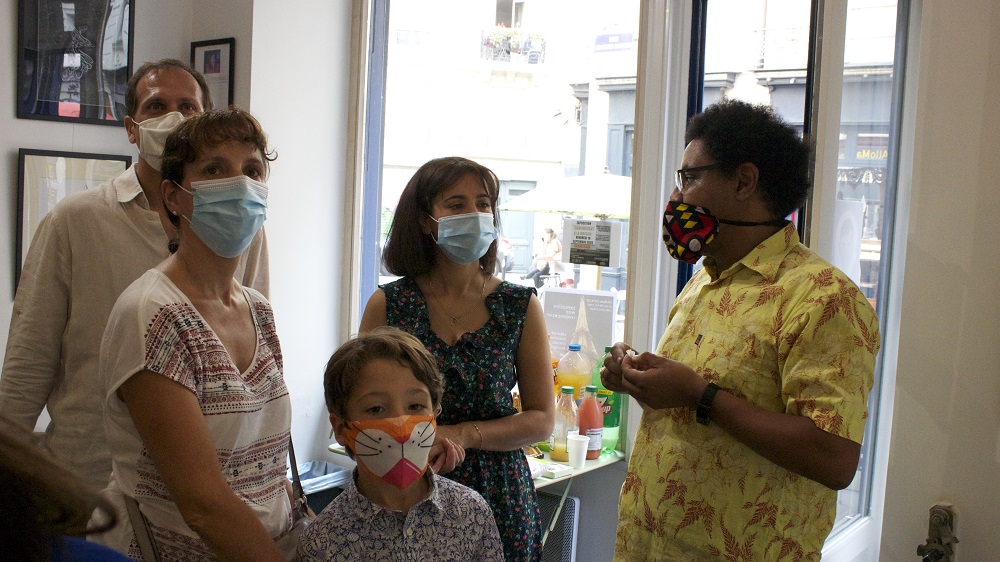 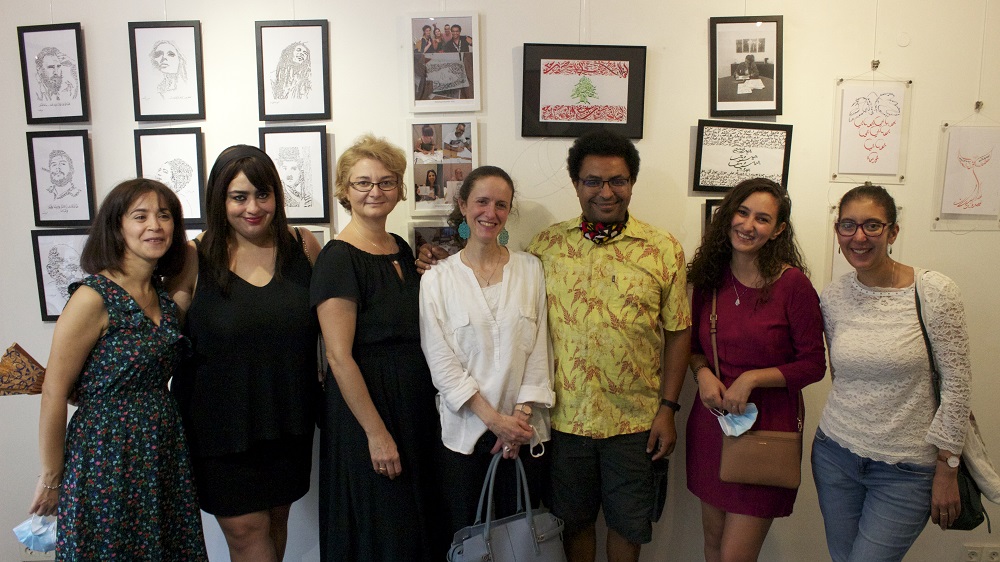 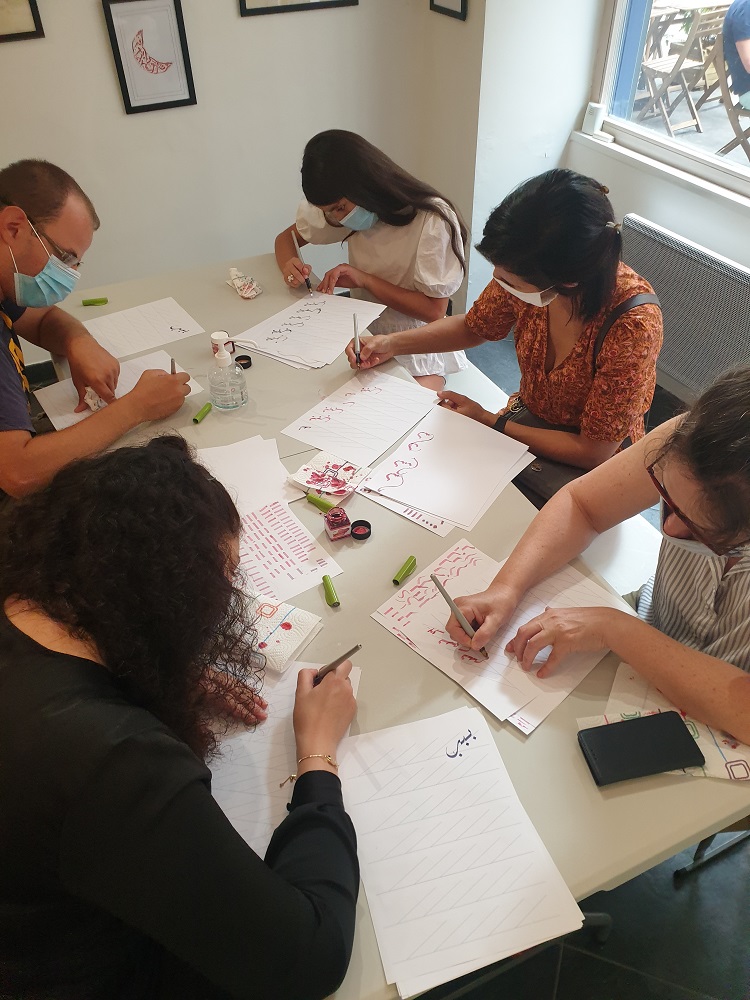 The idea came from a very good friend of mine.

Last year, he asked me: “Hey Hicham, why don’t you come over here and teach?”

Since then, we have organized already 3 events this year and the fourth is already scheduled.

It is a great honour and pleasure for me to travel over to Lebanon and teach about my passion. The way I teach differs from traditional calligraphers. I listen a lot to my students and adapt myself to their objectives.

It takes years to become a very good calligrapher but only few hours to start having fun and enjoying the pleasure of this practice.

My idea is to show that light that will give people motivation to work hard. When students see what they can do after a few days, they want to learn more…

Being born in France, the first language I learned to write was French with its Latin alphabet. My passion for Arabic calligraphy started later when I was a student.

I was attracted by the harmony and the flow of the Arabic letters and got offered the possibility to be trained by a Master. I focused initially on the Diwani style for which I received an intensive training. When I felt more comfortable with Diwani, I tried the Koufi style which is more geometric. In fact, this style is usually integrating architectural elements.

Full of imagination, I noticed that Arabic letters written with Koufi style were showing geometrical similarities with Latin letters.

And for the letters that are not so similar, I noticed that you could split the Arabic letters into basic elements that can be combined subtly to appear like a Latin letter.

Arabic calligraphy has a rich panel of styles and scripts

Calligraphers with imagination can be very playful